Each year, we recognize an individual who is nominated by the community and selected by a committee to be the year’s Outstanding Citizen. The Outstanding Citizen award is a highly esteemed recognition given to someone in our community who exemplifies hometown pride through service and engagement. This is someone who devotes an extraordinary amount of their time to the betterment of Newton.

Once a nomination form is submitted, it is reviewed along with other nominations by the past 5 award recipients, who select the winner. The nominee selected for the award will not be aware of their nomination, so that when they are announced at the Chamber Annual Banquet, it will be a pleasant surprise! The 2023 Annual Banquet will take place in the Fall of 2023. 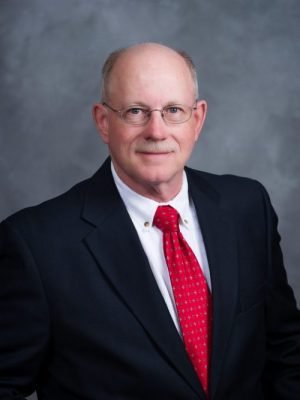 Chip Westfall has proudly and honorably served Newton and Harvey County for over 50 years in various volunteer and leadership capacities. His natural leadership skills were refined through the Chamber’s Leadership Newton program, and he uses those skills for the betterment of his home county. For 28 years, Chip served Newton and Harvey County as its State Trooper and 2 years as a Halstead Police Officer through the good times and the bad. He was available 24/7 as a State Trooper and as a County Commissioner whenever the need arose and answered countless phone calls and visits at his home and in the community by citizens.

For 16 years as County Commissioner, Chip has carefully watched over the citizen’s tax money, helped provide a safe environment for families, encouraged a business-friendly environment, enhanced the county employee environment, and enhanced county parks and lakes.

For 18 years, Chip has been a project leader for 4-H’ers learning how to build model rockets from start to finish, helping the kids launch and then retrieve their rockets and finally guiding them through the repair and preparation of their rockets for interviewing and judging at the Harvey County Fair. For 43 years and counting, chip has encouraged and supported all 4-H kids in their various projects. Chip has also been involved with the Harvey County Fair as the voice of the Demo Derby for the last ten years. In conjunction with 4-H, Chip was involved in the administrative side of the Harvey County Fair by serving on the Fair Board and taking on the responsibility of coordinating the Fair Parade.

Chip was one of several people instrumental in upgrading the 911 radio system which deleted the radio dead zones within the county thereby ensuring that emergency responders in Harvey County would have consistent radio communication with dispatch and each other, as well as ensuring that citizens would always be able to reach 911 dispatch in times of need. Chip served on the Harvey County Local Emergency Planning Committee which was instrumental in the County’s response to the COVID-19 pandemic. Countless hours were spent by this Committee and the Harvey County Commission researching and determining the safest and best course of action to protect the citizens of Harvey County.

Finally, for the last 18 years, Chip has visually entertained countless Newton and Harvey County citizens during the Christmas season with his front yard Christmas displays. Over the course of the years, he has been the “Mr. Griswald” with numerous air blown characters and nativity scenes celebrating the reason for the season, as well as enjoying the fun of the season. He has been tickled numerous times by kids thanking him at Halloween for the fun Christmas display, by folks stopping by the house to thank him for the effort, and by anonymous thank you cards in the mail showing appreciation for the work. He really is a kid at heart!

The Newton Area Chamber of Commerce would like to thank Chip for the extraordinary care that he shows to our communities, and the great work that he has done in service of others. Congratulations, Chip Westfall, our 2022 Outstanding Citizen.

Below is a list of everyone who has received an Outstanding Citizen award:

Breakfast with the Chamber

Breakfast with the Chamber